Read the first chapter of Kompromat by Stanley Johnson 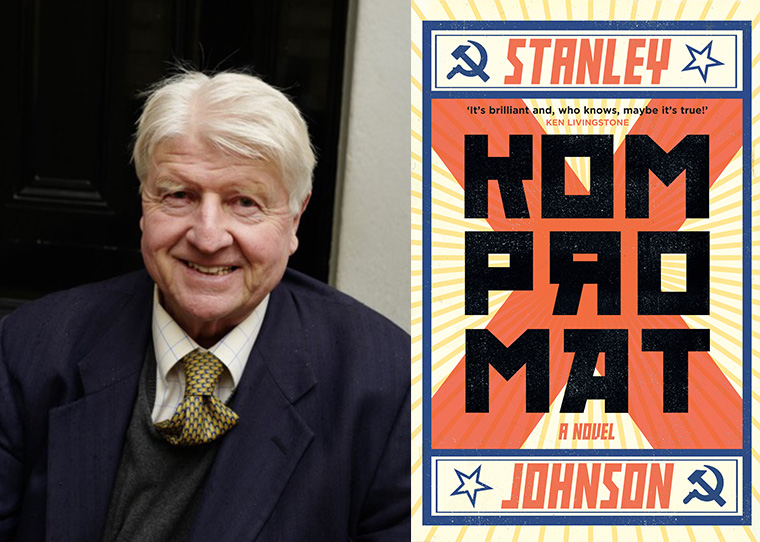 Jack Varese, winner of the most recent Best Actor Oscar, was late. Very late. Sitting in the front row of the celebrity audience in St Petersburg’s famous Mariisnky Theatre, Russia’s long-serving president, Igor Popov, muttered to an aide, ‘Where the devil is he? We’re going to have to start without him.’

Popov glanced across the aisle to where the German chancellor, Helga Brun, stared stony-faced at the empty stage in front of her. Next to her was China’s prime minister, Liu Wang-Ji, and next to him in the VIP line-up came India’s prime minister, Nawab Singh.

President Popov was about to go up onto the stage himself to explain the delay when there was a sudden commotion in the wings.

The loud speakers burst into life. ‘Ladies and Gentlemen, the guest of honour, Jack Varese, has arrived and will address the gathering.’

‘So sorry,’ the American began. ‘We were delayed by headwinds on the way over from New York so we had to refuel in Helsinki. Guess I should have flown Aeroflot after all! Or else Ron Craig here could have brought me in his Boeing. But, hell, I like to fly my own plane!’

Varese beckoned Ron Craig up onto the stage. ‘This is a man who wants to help save the world’s tigers. So I said to him. “Welcome aboard, Ron. Your help is sorely needed. President Popov needs your help.” So that’s why we’re all here. To support the World Tiger Conservation Action Plan, which President Popov has launched tonight.’

Within a few moments Varese had them eating out of his hand. Popov sat back in his chair and relaxed.

This World Tiger Summit had been very much Popov’s own initiative. A passionate outdoors man, he liked nothing better than to be photographed bare-chested in fi eld and forest, preferably with a hunting rifle in his hand. Of course, there were some animals he didn’t shoot and the fabled Amur tiger was one of them. There were still a good number of these magnificent beasts left in the wild, way out there in the Russian Far East. Some of them indeed were so far to the east that they sometimes crossed the Ussuri River and strayed into Chinese territory. The previous day, in a tête a tête with China’s president, Liu Wang-Ji, Popov had said, ‘You may have killed and skinned all your own tigers, Mr President, but kindly keep your hands off ours!’

When it was Popov’s turn to speak he kept his remarks short.

‘Today, ladies and gentlemen, we are adopting a World Tiger Action Plan. Yes, there are 450 Amur tigers left in Russian Siberia; yes, there are maybe 3,000 tigers in India; yes, there are tigers in Cambodia, Vietnam, Thailand, Myanmar, Bangladesh and so on. But, believe me, those tiger populations will be extinct unless we take action now.’

Later that evening the presidents and prime ministers of the tiger ‘range states’, whom Popov had personally invited to St Petersburg, gathered for dinner in the glittering splendour of the Winter Palace.

Edward Barnard, MP and Secretary of State for the Environment, found himself, by some quirk of protocol, sitting next to Helga Brun, the German chancellor.

Barnard, an outdoor man himself, was full of praise for the way Popov had handled the event. ‘I thought he would just look in and out of the meeting, but he put in three full days. He must really care. And he had some kind words for Europe; he acknowledged the help we have given with his tigers’ cause.’

Helga Brun laughed. ‘Don’t believe everything he says. Our people in Moscow tell me that he’s absolutely furious. He thinks
we’ve backed Russia into a corner. From Popov’s point of view, we’ve been running after the Ukraine the way a dog runs after a bitch on heat. We’ve been expanding NATO right up to Russia’s border. We’ve imposed sanctions over Crimea. I admit we have seen one side of President Popov tonight, the rather pleasant side, but I can’t help feeling we are going to see another side very soon. Popov is planning something big. Very big. You mark my words.’

The guests all rose to their feet as President Popov left the splendid dining-hall to the sound of trumpets.

Jack Varese, very much recovered from the long journey and its various mishaps, worked the room glass in hand, moving from table to table like a politician running for office.

It wasn’t long before he took Barnard’s hand and shook it warmly. When Barnard introduced himself, Varese commented: ‘So you’re the leader of the UK delegation. Secretary of State for the Environment. That’s a great handle to have.’

‘We may not have any tigers. But the British government wants to make it clear we fully approve of President Popov’s initiative.’

Seconds later, President Popov himself stopped at Barnard’s table. He was, Barnard guessed, around fi ve eight in height, a trifle less perhaps. Thinning hair, carefully brushed back to cover a bald spot.

Barnard bowed his head instinctively. This was the Russian head of state. Whatever you might feel about the man, you had to respect the office he held.

A lavishly decorated aide hovered at Popov’s side. The president had obviously been well-briefed.

‘Please thank your government for the support they are giving to the World Tiger Action Plan,’ Popov told Barnard. ‘We very much appreciate it. I hope one day soon to come to London to show my appreciation in person.’

As the presidential party moved on, Barnard muttered to himself, ‘Dream on!’ Reaching for another drink, he found it hard to imagine that Popov would be making a state visit to Britain any time soon. Not in the current climate.

The party began to break up. The limousine was waiting to take him back to his hotel. Sinking back into the plush leather seat of the sleek, black 3-litre BMW that the authorities had made available for the VIP guests, Barnard took his phone from his pocket.

Although some of his fellow Cabinet ministers had joshed that his trip to Russia was a mere jolly, there was after all some important news to convey to the authorities back home. He had absolutely no doubt that, in their separate ways, both the Russian president and the German chancellor had hoped that he, Secretary of State for the Environment, would convey a message to London, and he was delighted to be able to do so.

How things had changed in Russia over the last few years, he thought. In the big cities at least, it was all bling and gizmos. Wi-Fi was everywhere. Even in a moving car twenty miles outside St Petersburg you could pick up a signal, which was more than could be said for some of the outlying areas of London. Edward Barnard began to tap out his message.

Not far away, on the FSB control centre on St Petersburg’s Cherniavski Street, Fyodor Stephanov, a tall, broad-shouldered
man with a scar on his right cheek, picked up Barnard’s message almost as soon as it had been sent.

He printed off a fl imsy and walked quickly into the next room where his superior took one look at the text.

‘Not even encrypted! Not even the lowest level! What do they take us for?’

He handed the fl imsy back to the duty offi cer. ‘You’d had better get going,’ he said. ‘Pass the word. And make sure the women know what to do.’

Stephanov rubbed his hands and smiled. ‘They know all right.’ In due course, he would be well paid for the video he would offer for sale on the now well-developed market for such material. He always welcomed a little freelance action. He was saving up for that Baltic cruise with his new girlfriend.