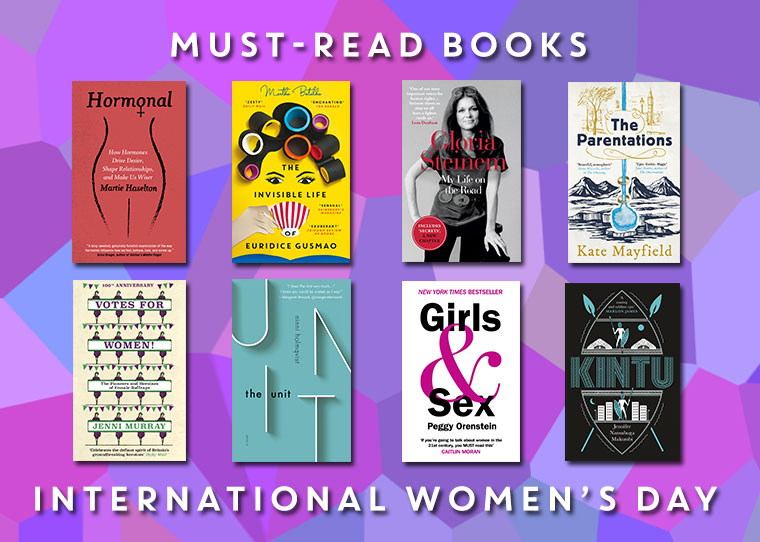 If you’re looking to mark International Women’s Day by reading books written by and about women (and you should be), we’ve selected 8 titles to inspire and empower. Check out the end of this post for a sneak peek at 3 upcoming books that we’re excited to be publishing soon.

Votes for Women! by Jenni Murray

100 years ago (some) women were given the vote for the first time. Meet some of the women who fought for change by any means necessary.

My Life on the Road by Gloria Steinem

One of the greatest feminist icons of the 20th and 21st centuries talks about her journey to where she is today, featuring campaign trails, standing up for her beliefs, and a lot of travelling.

Girls and Sex by Peggy Orenstein

How are teenage girls navigating the changing landscape of female sexuality? Learn about the difficulties and pressures of growing up as a woman in the 21st century.

Get empowered and discover the concept of hormonal intelligence from the world’s leading authority on sexuality and the ovulation process.

Mixing myth, legend and folktale, Kintu is an award-winning debut novel telling the story of Uganda’s history through the cursed bloodline of the Kintu clan.

The Unit by Ninni Holmqvist

A near-future dystopian novel for fans of Margaret Atwood, The Unit centres on organ donation in a world where certain inhabitants are deemed ‘dispensable’.

The Invisible Life of Euridice Gusmao by Martha Batalha (translated by Eric M. B. Becker)

Darkly comic, charming and rebellious, follow two sisters who are not ready to play by the rules in 1940s Rio de Janeiro.

The Parentations by Kate Mayfield

The below three books will be coming out over the next few months, so make sure to add them to your must-read list:

A poignant story of two girls growing up in war-torn Baghdad that has been shortlisted for the International Prize for Arabic Fiction 2018.

A hilarious debut about a young cleaning woman’s journey to find herself.

An essential feminist manifesto and call-to-arms for feminists past, present and future.

This isn’t by no means an exhaustive list. Explore our website for more brilliant books written by women, and let us know your favourite reads on Twitter.