The weirdest maths facts ever 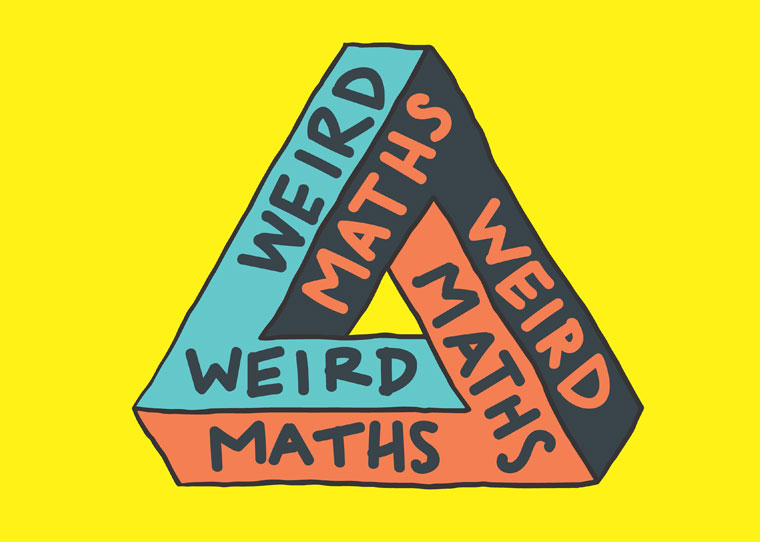 Take a ham and cheese sandwich. There’s a theorem that says it’s always possible to make a cut through the sandwich so that the two halves have exactly equal amounts of bread, ham, and cheese. The ingredients can be any shape you like, and can even be in different places – say, the bread in the bread-bin, the cheese in the fridge, and the ham on the counter. They could even be scattered across the Galaxy. The Ham Sandwich theorem holds in every way. A slice can made – or a plane drawn – that equally divides the bread, ham, and cheese. The theorem even holds in higher dimensions. In five dimensions, for instance, five objects, whatever their shape and position, could always be bisected with a single slice.

The biggest lawsuit ever filed, by a New York man who claimed he was bitten by a rabid dog, was for 2 trillion trillion trillion dollars – far more money than there is on Earth. Mathematicians are used to dealing with vastly larger numbers. Some are so huge that there isn’t enough space in the known universe to write them down, even if each digit were as small as an atom. Yet none of these unimaginably vast numbers are any closer to infinity that the numbers with which we first learn to count.

The English mathematician Charles Hinton, at the end of the nineteenth century, claimed he had taught himself how to visualise objects in the fourth dimension, using a complicated set of coloured cubes. ‘Hinton cubes’ were even sold to the public along with lengthy instructions on how to use them to see in 4D. Such a possibility may soon be within our grasp. Normally, we recreate scenes in three dimensions from signals sent to the brain from our retinas, which are essentially flat surfaces. What if we simply stepped up a dimension using something like an all-body scanner to provide us with the equivalent of a 3D retina? The data from the scanner could be fed, via a brain-computer link, directly to the brain giving us all the information we needed to construct a four-dimensional view.

The last time anyone beat the top chess computer in the world was 2005. Since then chess computers have become so powerful that it’s almost certain no one will ever beat them again. The highest rating ever achieved by a human is 2882 by current world champion Magnus Carlsen in 2014. This is far below the ratings of the strongest chess engines, which are more than 3400. Meanwhile computers are begin to surpass humans at a far more complex game – Go. In 2017 AlphaGo defeated the current world number 1, Ke Jie, in three games out of three.

The greatest unsolved problem in maths is the Riemann Hypothesis, which has to do with the distribution of prime numbers. These numbers – ones that will only divide by themselves and 1 – are equivalent to the atoms from which maths is built. They’re hugely important but not well understood. Most mysteriously, although they seem to crop up at random, collectively, they follow certain patterns. The Riemann Hypothesis, if proved true, effectively says that although it’s uncertain where prime numbers will spring up, this uncertainty is as well controlled as it could possibly be. It would give the best possible answer that mathematicians can ever hope for to the question: Given any number N, how many primes are there that are smaller than N? The great German mathematician David Hilbert said that the first thing he would ask on waking from a sleep lasting at thousand years would be: “Is the Riemann Hypothesis established yet”? A $1 million prize has been offered by the Clay Mathematics Institute to the first person who can supply a proof.