How to Win a Nobel Prize

Mary has always wanted to win a Nobel Prize and loves running her own science experiments at home.

One day Mary stumbles on a secret meeting of Nobel Prize winners. Dr Barry Marshall agrees to travel with her through time to learn the secrets behind some of the most fascinating and important scientific discoveries. They talk time and space with Albert Einstein, radiation with Marie Curie, DNA with Crick, Watson and Wilkins – and much more.

Filled with experiments to try at home and featuring famous Nobel prize-winners:

Buy from
Buy from

'I really enjoyed the activities at the end of each chapter, there are some unbelievable experiments. The fact that it was a female lead character added to the delight of reading this.'

‘A fascinating whistle-stop tour of the lives and accomplishments of eleven Nobel prize-winners.'

'How to Win a Nobel Prize does a superb job of telling the fascinating stories behind many different Nobel prize winners. It is a fantastic journey through time with Mary and Barry, meeting amazing scientists past and present. I especially enjoyed the many experiments you can try yourself that fit the theme of each prize winner.'

‘A recommended read for science fans – and future Nobel prize-winners – aged 8 and over.’ 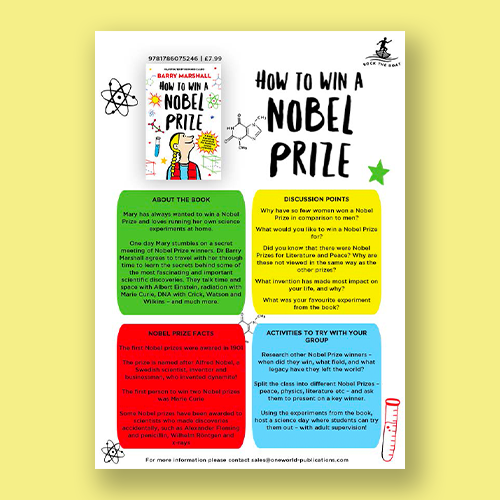 How to Win a Nobel Prize Activity Pack